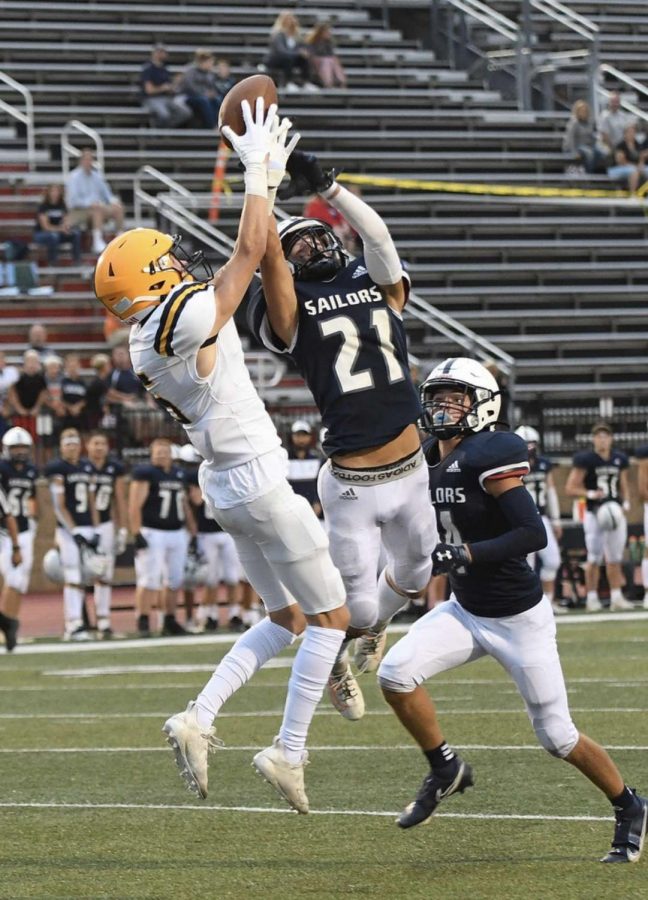 Wide Receiver Ian Masek '22 reels in a crucial reception over a South Christian defensive back Friday.

After a disappointing finish to their opener, the football team traveled to South Christian in search of a big early season victory. They got just that.  Every aspect of the game was firing on all cylinders, as the Pioneers jumped to a 30-7 lead, before cruising the rest of the way en route to a 30-21 victory over the Sailors.

The ground attack did not skip a beat, posting another strong game. Jack Higgins ‘23, ran for 80 yards and a touchdown, and Drew Caswell ‘23 added 56 yards and a touchdown of his own. David Bernecker ‘22 turned in a solid performance at quarterback, as his wrist injury did not seem to be an issue. He completed 4 passes for 136 yards, a touchdown, and an interception, including an 80 yard touchdown to Damien Fortson Jr. ‘22. Nathias Grady ‘22 had over 100 all purpose yards, rushing for 66, and completed one pass for 42 yards on a trick play.

The real difference between Week 1 and Week 2 however, was the strong play of the defense. They had the South Christian offense scrambling all night, forcing 4 turnovers. Brendan Burns ‘22, Joseph Rose ‘22, and Ryan Reszka ‘22 each had an interception, and Grady contributed a forced fumble. “I thought we played well. It was a really fun game because the ball was in the air a lot,” Reszka said. This was in contrast to the run-centric offense the Pioneers saw from Zeeland West in the previous game. “We had a lot of key takeaways which I think won us the game on the defensive side of the ball.”

With the first win under their belt, the Pioneers shift their focus to an important game against crosstown rival Grand Rapids Christian. EGR has not beaten the Eagles since the 2017 season, and they will look to change that on Friday September 10. Captain Conor Callahan ‘22 is looking forward to getting his first win against Christian as a member of the varsity team. “The rivalry against Christian is very heartfelt and personal to most of us because we know a lot of the guys we are going up against. The plan is to play East Grand Rapids offense and defense the way we know we can play,” Callahan said. The Eagles are off to an uncharacteristic 0-2 start, but Callahan knows to not take their opponent lightly “It’s also a huge game for us as a team to keep rolling coming off of a win, and with Christian being 0-2 to start, they are going to be hungry to come out and kick our ass, because this is their Super Bowl, and it would make their season if they beat us, even if they go 1-8.”

Having played against this group of guys for many years, the team knows what it’s going to take to win. “In simple terms, it’s going to be a very physical game, and the more physical team is going to win,” Callahan said.