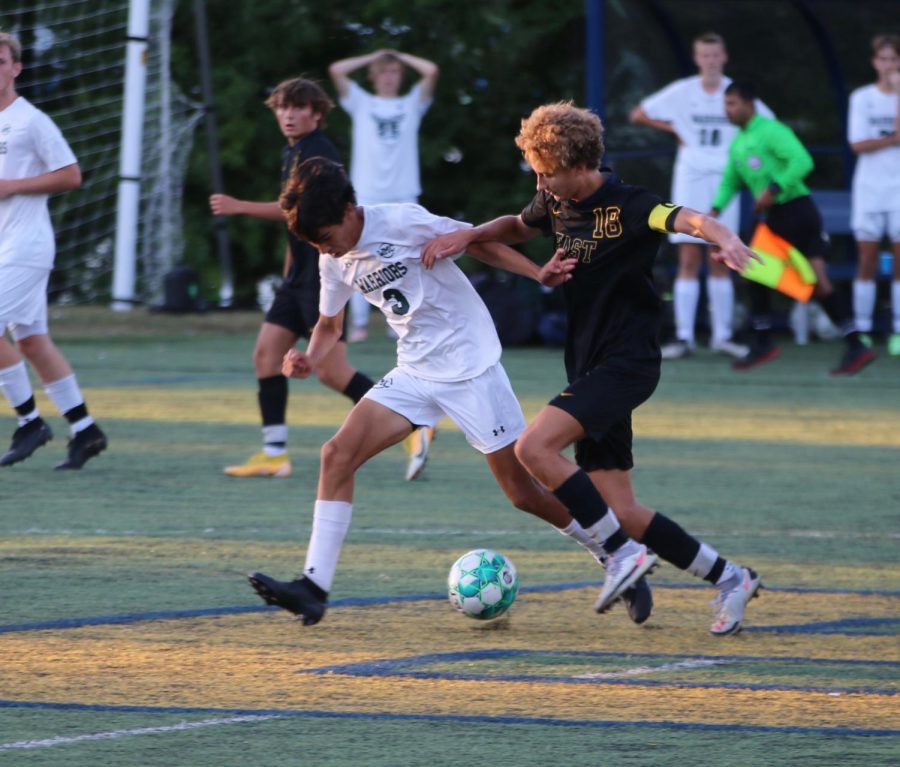 Jonah Bishop '22 fights off a challenge from an opposing defender.

Pioneer soccer season has arrived and so has the competition. The Pioneers had one of their biggest weeks yet with three games over the course of just four days, including their first two conference games of the season.

The East Boys Soccer team was able to defeat Forest Hills Northern on Tuesday, despite a weather cancellation. Eamonn Burns ‘22 scored two goals to give the Pioneers a 2-0 win over the Huskies. East tied Byron Center 2-2 on Thursday night. East broke through thanks to the right foot of Burns. Logan Becker ‘23 added a second on a header from a Peter Cannon ‘23 cross to earn a tie. The Pioneers will take on Potter’s House Christian on Friday at 4:00 PM to complete the big week.

The win over Forest Hills Northern opened up conference play for the Pioneers. East is playing in a tough OK White Conference this year, shown in the fact that the team could only muster a tie against Byron Center. As the East soccer team looks forward to the Potter’s House Christian game, Caden Chenlo ‘22 says that the biggest keys to winning will be “to start the game strong and come out early because even though it isn’t a conference game, every win still builds on itself for confidence and momentum going into the rest of the season.”

A win over Potter’s Christian would be huge in closing off an intense week for the Pioneers as they roll into this busy season.