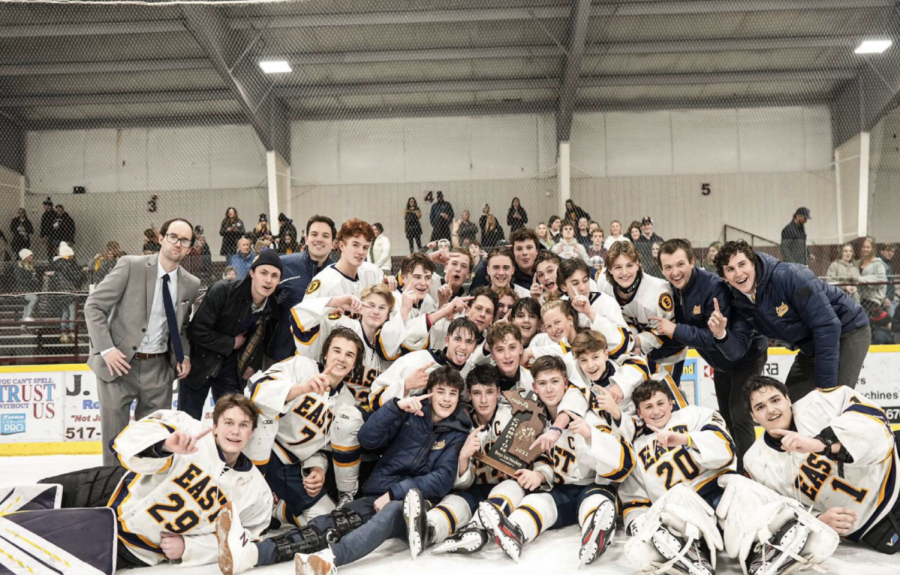 The early mornings, long days, and hard practices paid off. The hockey team started off the playoff season strong winning two games before taking home a mitten after winning regional championships in a game versus Mattawan. However, losing the quarter finals game put an end to their 2021-2022 season.

“We all hoped we would make it as far as we did and of course we wished we could’ve made a longer run,”Meg Simon ‘22 said.

The first game of the season was known as one of the most exciting, with the help of the new tradition set in this year: “the stew”. The stew is a commonly known nickname around the highschool for the student section. The players value the stew for raising energy and pumping them up during an intense game.

“When a lot of people are at the games it makes the players on the ice excited and when they cheer it gives the team goosebumps,” Charlie Hoekstra ‘24 said.

Another heartwarming game was the I Understand/Hearts of Gold night where the community came together to raise mental health awareness and promote kindness.

“The bear toss at the game was so great to see my passions coming together to benefit  the community as a whole,” Simon said.

Hockey is a sport with a lot of physical contact and unfortunately the team was faced with minor and major injuries in some of their valued players. During the second half of the season, a star sophomore player faced a major injury which was another obstacle the team had to skate through.

“One of the more notable injuries was JT Lamange ‘24 who tore his ACL after the new year against Mona Shores,” Tyler Sikkenga ‘23 said.

“Never did I  think I would be the only girl on a hockey team but the boys welcomed me with open arms and made sure I felt like I was one of ‘the boys’,” Simon said, “I think of them as my little brothers.”

Playing as a team is important to seeing improvement and success on the ice. The team prioritizes building strong relationships to one another by team dinners, away trips, and other team building activities.

“We were together more than we are with our actual families during the season so it’s so important to have those strong relationships,” Simon said.

After winning regionals for the first time in four years, the team sends off four senior players with well wishes and thanks for their remarkable spirit and being role models for the underclassmen. Moving on with quality memories the team will start training for the 2022-2023 season in a couple months.

“I want to say thank you to the seniors for making it a season with history,” Hoekstra said. “They helped me by their leadership and their energy was always high and made you want to be with the team.”