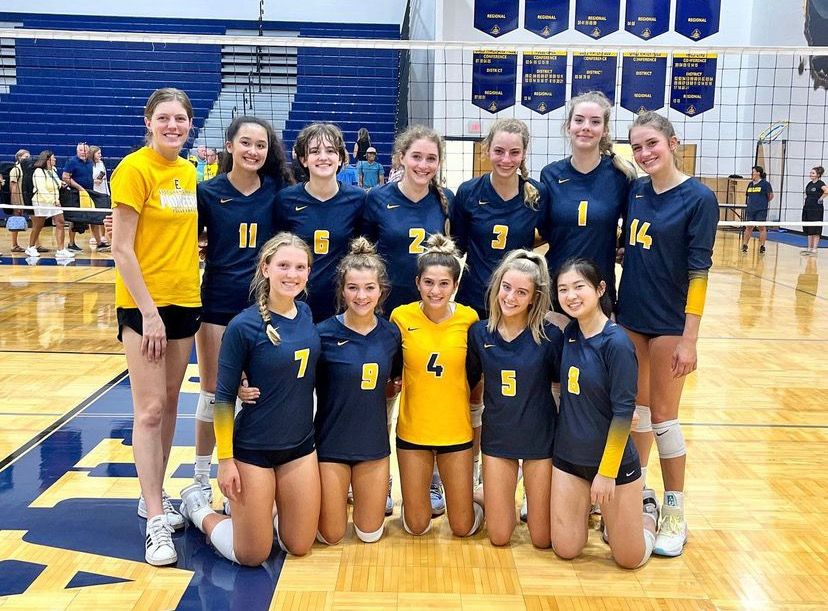 After the loss of the entirety of their coaching staff, East Girls Volleyball began its season with a clean slate. Their new young female coach Kylie Patton, has brought the team together with her new ideas and fun attitude.

With the last coaches all being male, Kendal Britton ‘23 thinks it’s easier to relate to a female coach.

“But overall each coach has their own style of coaching, so just adjusting to a different style is difficult,” Britton said.

Their new coach, Kylie Patton, a Senior at Aquinas College has taken the reins of the volleyball program. Patton left the sport of volleyball in college and is happy to join the team.

“I’m looking forward to really just being a part of volleyball again,” Patton said. “I’m hoping I can bring some fresh knowledge as volleyball is changing so much each year being younger I feel it’s beneficial to know newer drills and techniques to keep the girls ready to go for this year and college years!” Patton said.

Although the volleyball team hasn’t started conference games yet they’ve already played three tournaments. In the most recent tournament, The End of Summer Bash, they won the silver bracket.

Ella Taatjes ’25, a second-year starter, is very excited about the new environment.

“My favorite part of this team so far is that we all value each other’s successes and that we stay positive even if we aren’t playing well,” Taatjes said.

The team has many important games coming up, but one of their greater challenges is themselves.

“Right now our biggest competition within ourselves is getting to know each other and trust each other because it’s hard for some random new coach to come in and change what some girls have known for years,” Coach Patton said.

The girls are practicing hard and preparing themselves for the rest of the season. With the hope of making a run in the playoffs this year.